Quay Restaurant is officially Australia’s best restaurant of 2010. It captured the crown from Tetsuya’s, which plunged on the world’s rating. One of its strengths was the restaurant’s location. It sits atop Sydney’s best spot with vintage view of both the Opera House and Harbour Bridge.

We were indulged in eight exquisite tasting plates – with an additional appetiser, petits fours, and coffee and tea of our choice, from Sydney’s infamous chef, Peter Gilmore. We also specially requested to have their legendary Eight Texture Chocolate Cake since it was not on the degustation menu. There was also four types of sourdough bread that you could have as a side. 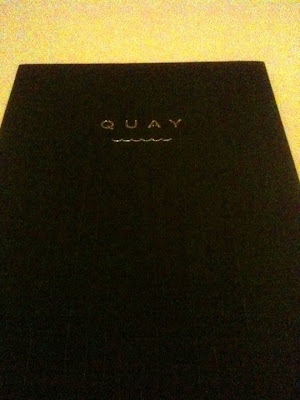 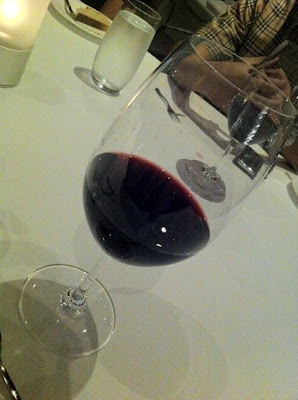 This is the chef’s welcome plate. I am not sure what was in it or how the waiter exactly pronounced it, but this tiny plate packed up massive punch. Unfortunately for me, it tasted better than most of the entrees for the night. 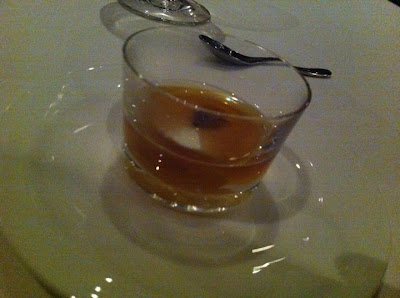 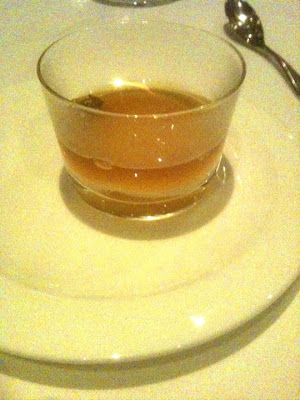 The name didn’t really reflect all of the ingredients of this plate. On top of the dish were two purple flower petals and edible silver foil. The next layer was the smoked eel and a ball of sea scallop pearl with a hint of horseradish sauce at the bottom. It was a simple and beautiful dish in a shell-like plate. 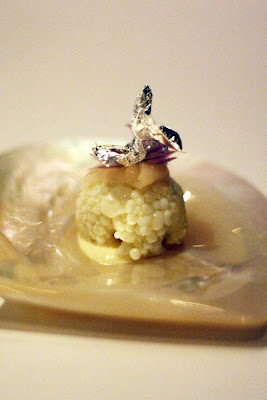 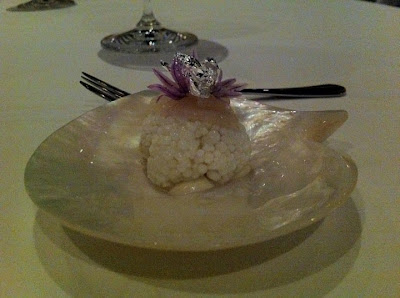 Definitely my least favourite plate of the day! Basically, it’s a plate full of colourful vegetables in a bed of goat cheese. Granted that they must be the freshest and most exciting vegetables I’ve tasted, but at the end of the day, they’re still vegetables and I don’t like them. The goat cheese saved my day since it brought in flavour into the plate. 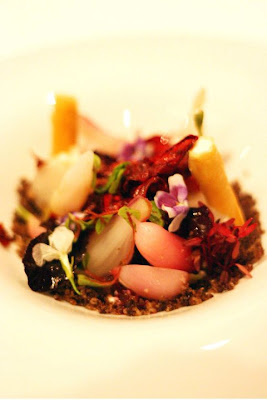 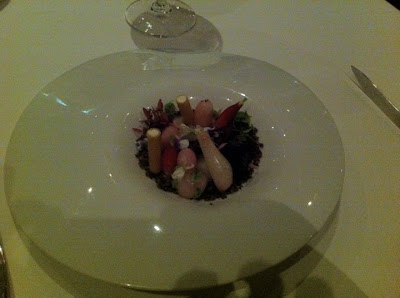 Our next entrée was a plate full of mashed up seafood. The seafood flavour was too rich to my liking and the vegetables did little help to neutralise it. There were slices of scallops that did not seem to be on the menu. It would have been much better if they would go easy on enhancing the seafood taste, since individually the seafood was excellent. 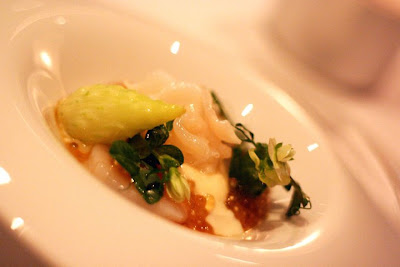 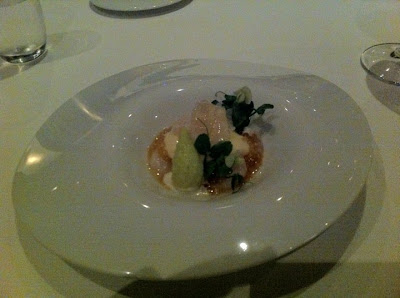 The main course came in with a bang. Beautifully cooked and glazed quail breast was laid in a bed of chestnuts and a truffle with some nutty sauce. On its own the quail was pristine. Juicy, chewy, and yummy flavours all rolled into one. Combined with the nuts and truffle, it became unbelievable. One of my friend described eating it as ‘ I’m having my out-of-this-world moment’. It was just surreal. 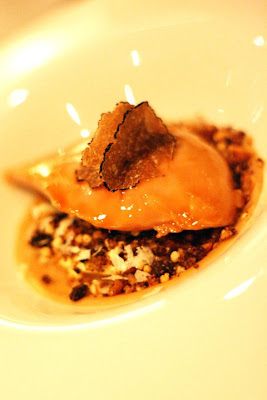 The second main course was also breathtaking. Lightly poached marbled wagyu fillet accompanied by soft Tasmanian wasabi tasted extremely chewable and juicy. The soft meat was complemented by nice green spinach and green peas puree. I was amazed by the softness of the meat. 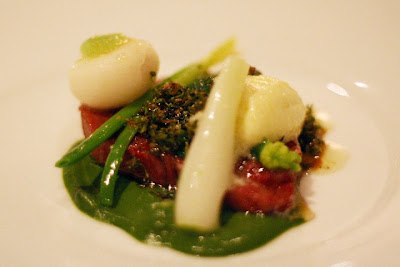 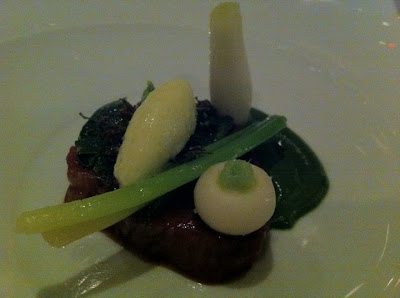 The pig jowl was in the degustation menu but we opted for the alternative Braised Snapper Fillet. Perfectly cooked fish fillet with white cucumber and tasty yellow sauce with a garnish of spinach. Although it was the least interesting of the three, the fish was very good. The alternative menu looked equally crackling. 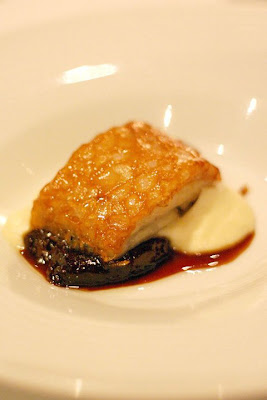 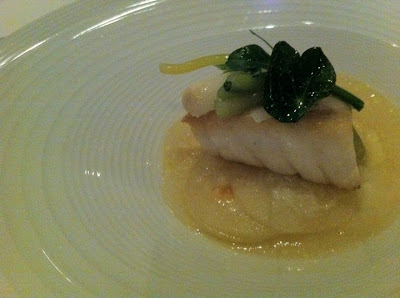 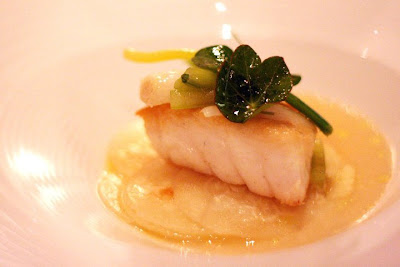 This one was made famous by the show Masterchef. Full-on gastronomy in action! It was an egg-shaped meringue with custard filling. Covering the egg was burnt caramel and sprinkles of powdered sugar. The glass’ base was filled with jackfruit granita (shaved ice with jackfruit flavour). This was a real stunner. You had to ‘crack’ the egg as if cracking a real egg. Then the soft egg whites would stick to the skin with ‘egg yolk’ dripping out of the egg. Taste wise? Heavenly refreshing! 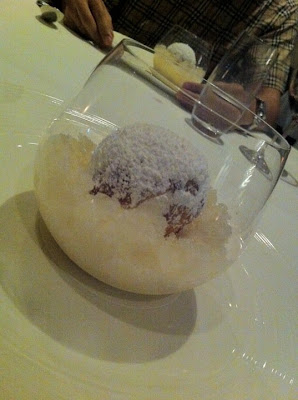 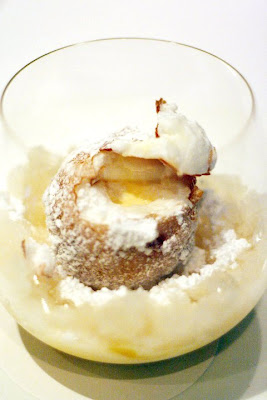 This was supposed to be the heavy hitter that replaced their legendary cake. Presentation wise, it was great but it didn’t quite capture my tastebuds. The compote was excessively sweet. The combination of coconut and chocolate base was two of my least favourite dessert ingredients. We thought it was too heavy to be the last dish of the day. 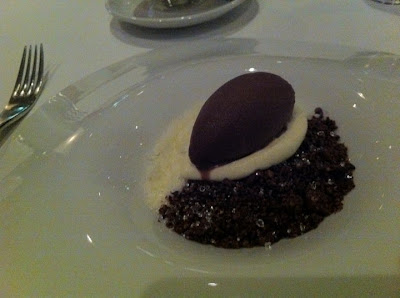 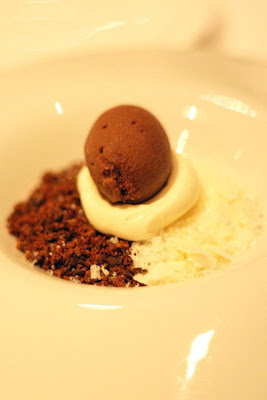 This one was out of the menu but we ordered it to fulfil our curiosity for Quay’s legendary cake. First it looked like a block of plain chocolate cake. Then melted chocolate was poured on top of it and created a concave into the cake. 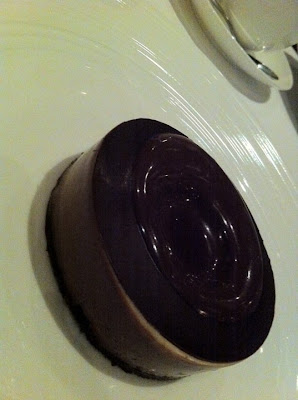 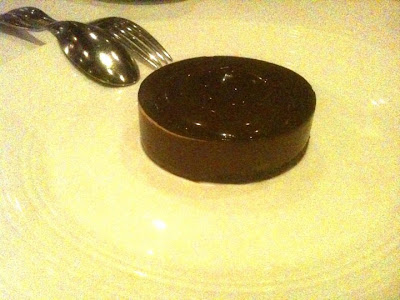 As a closure, there were café latte with 4 pieces of hazelnut chocolate and Bailey amaretto chocolate. 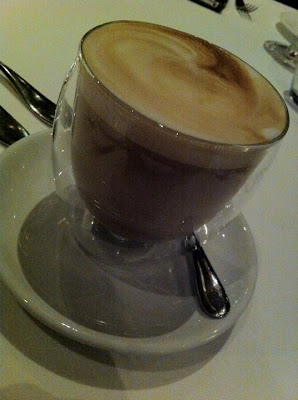 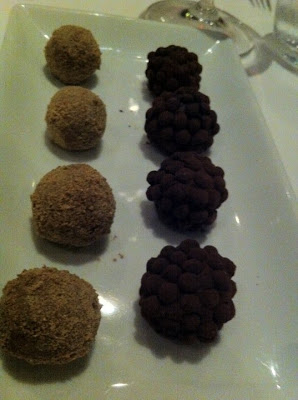 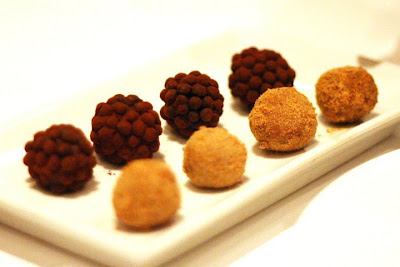 The final verdict: Quay totally deserved the title of this year’s best restaurant because of its innovative array of menu. Snow egg and Quail breast were my highlights of the day. I reckon they are much, much, better than the legendary Chocolate Cake. Decoration wise, the restaurant looked a bit out of date, but with a view like that, nobody would complaint.

As with any other ultra-famous restaurant, Booking is a necessity. You will not get a table if you just walk in – unless if you are Brad Pitt, I suppose. So, please book months in advance.

Unlike in Tetsuya’s, we actually did not meet Peter Gilmore in person.