This will be a two-part chronicle as I think it’s important to tell the story on the actual procession and not just the food.

The second part (the food review) will be available for my next post. I will update you with the link on this page when it is published. I went to the Chefs Gallery Macquarie Celebration Dinner / Feng Shui Blessing because I was invited by Stewart and Leonardo from Whiteworks Public Relations. The event was attended by quite a few notable names in the culinary industry, including chef Janni Kyritsis. Thanks to Chopinand from ChopinandMysaucepan.com, I was spared the blushes of not knowing his achievements! There were quite a few attractions before the feng shui blesing ceremony started. We were entertained by Master Calligrapher (which I forgot his name – apologies) demonstrating his skills in writing our names using Chinese calligraphy. A friend of mine gave me a Chinese name “??” a long time ago, so I’m getting that calligraphy made. In front of the master calligrapher, there was a Guzheng zither played. After a few rounds of finger food and light refreshments, the procession was opened by the usual ribbon cutting ceremony by the owners. The table was already pre-arranged and I was sitting next to Chopinand and the guy who sponsored the drinks for the night. On our table, we had three distinguished chefs, including Janni, the MC (Claudia Chan Shaw) and a news reporter. The table was beautifully presented and each of us received a token resembling ancient Chinese gold ingot in gold envelope. Chefs Gallery Macquarie restaurant was decorated with Chinese Calligraphy all around the restaurant and there was a lot of hanging brushes for Feng Shui purposes. More information about Chefs Gallery Macquarie centre can be found on their website and this media release.

So what is Feng Shui blessing? Feng Shui House Blessing website offers quite an extensive article about the practise.

Claudia Chan Shaw (our host of the night) explained that Feng Shui literally meant wind and water. It is generally used to create a balanced chi for your establishments. It involved several steps including the cleansing rituals and appeasing the Gods (in this instance it included the God of kitchen). The last ‘attraction’ of the night was Noodle making session by Noodle master Pei Lin Jai (aka Chef Panda). Just like in the video above, chef Pei Lin Jai masterfully demonstrated how he created four different types of noodles on the night.

The first was ‘regular’ noodles. He then made a finer type of noodles. Up to the point where the noodles were extra fine! They then lit up the noodles that we thought was almost borderline smoke hazard that would set off the smoke detectors. 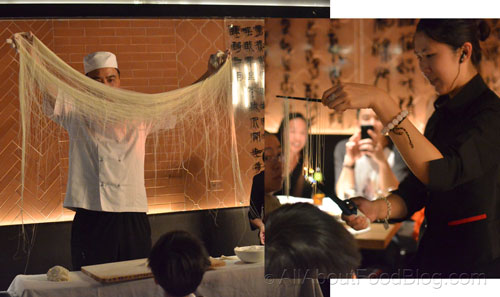 In addition to those ‘regular’ noodles above, he also created specialty noodles: spinach thick noodles, fish noodles and sorghum noodles. Unfortunately I only had the sorghum noodles pictured below. With this, I conclude my first part of the review. It is truly an amazing experience watching Feng Shui blessing.