Bubba Gump Shrimp Co. is the most awesome restaurant chain I have ever visited. They created the whole Forrest Gump (that movie with Tom Hanks) experience complete with their version of the characters’ favourite food. As you might already realise by now, their specialty is shrimps. 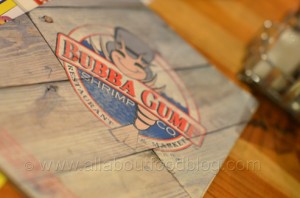 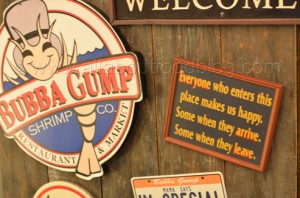 It got more awesome with the fact that the restaurant was decorated in a ‘60s setting. The staffs were incredibly cheerful and every so often you’ll hear them singing happy birthday with a full ‘orchestra’ (drums made of tin cans etc). There were sign plates (Run Forrest Run and Stop Forrest Stop) on each table to signal the waiters rather than just waving our hands. 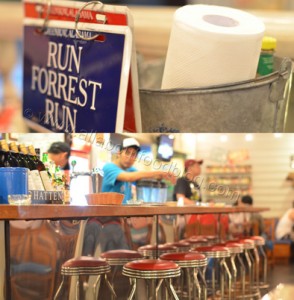 Our first dish of the day was Traditional Shrimp Cocktail. A dozen of jumbo shrimp served with Bubba Gump’s zesty cocktail sauce in an icy goblet. It was a nice and refreshing start of the day. FYI, the sauce was a little bit hot. 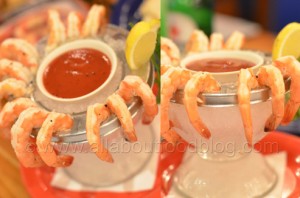 Barramundi with Lemon Garlic cream sauce was our first dish of the day. It turned out to be the least impressive dish with a little excess on the lemon. Our first theme-influenced dish came out next, Lt. Dan’s Drunken Shrimp. These chargrilled shrimps were positioned upside down to illustrate the ‘drunk’ness. It was complemented by sausages, mashed potatoes, and string crackers with Bourbon sauce. One of the dishes you must order at the restaurant! 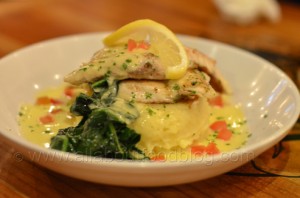 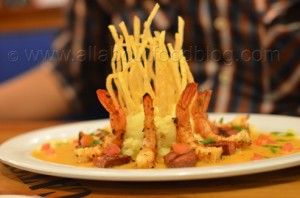 Bubba’s after the storm ‘bucket of boat trash’ presented a different approach for the night. Various deep fried seafood and chips were laid out on special-purpose (and clean!) newspapers in a tin bucket. You will also get three sauces (cocktail, tartare, and garlic oil) and a small plate of salad. Even with the skin on, the shrimps were edible-y crunchy with perfect seasoning. It might be one of the more expensive range (at Rp 230,000.00 ~ AU$ 25) but it is definitely worth trying! 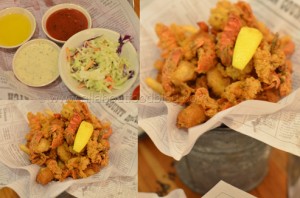 Bourbon street mahi-mahi was a bit too similar to the drunken shrimp but in this version, they used fish fillets instead of shrimps. For your little one, you can order Li’l Forest’s Favorite fish and chips complete with its ornament ship and fresh vegetables. 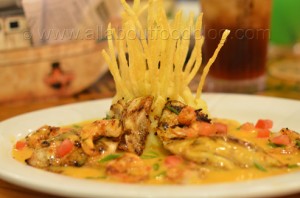 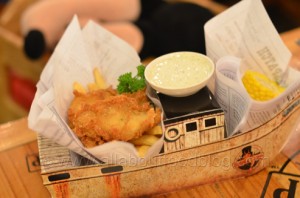 Our first choice of dessert was my all-time favourite dessert Mama’s Cinnamon bread pudding. It’s a shame that the plate looked so messy since the actual centrepiece was really nice. The biggest surprise of the day came in last, Chocolate chip cookie sundae. The waiter recommended us and it looked like the most unhealthy food I’ve ever seen. The dessert soon became the best of the day since it was incredibly yummy! Mountain of whipped cream with peanuts and chocolate and caramel sauce covered the hidden warm chocolate cookie. For someone who doesn’t like chocolate, not only could I stand this dish, I actually wanted more of it! 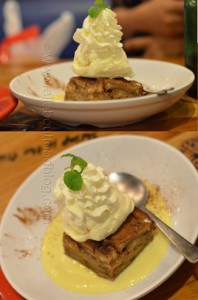 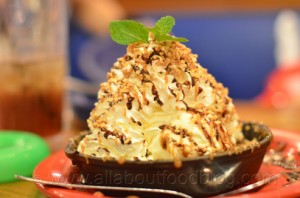 Bubba Gump Shrimp Co. is not just a restaurant with the perfect rendition of Forrest Gump’s era. Their shrimp-dominated menu was also fantastic. If you still have some space on your tummy, I would strongly suggest the Chocolate chip cookie sundae.

Bubba Gump Shrimp Co. also provided entertainment for kids and adults alike. They had the catch the mascot game and also trivia about the movie. So for those of you Die Hard Forrest Gump fans, brush up your skills and take this ultimate challange!