This week review is a restaurant in the city of Bandung called Bakmi Jowo DU 67. Bandung and most part of West Java consist of mainly Sundanese that has quite distinct Sundanese language and culture. Therefore, having authentic Javanese cuisines in Bandung is quite rare. I understand the irony of Bandung being in the island of Java.

The amazing thing about this place is that they cook our dishes using ‘arang’ (charcoal). Bakmi Jowo DU 67 is located in Jalan Dipati Ukur 67, Bandung (hence the ‘DU 67’ name).

Bakmi Jowo DU 67’s signature dish is its Bakmi (Noodles). They have three versions of the noodles: Goreng (fried), Godhog (boiled, with soup base), and Bakmi Nyemek. Nyemek is a Javanese word for a dish that’s neither dry nor soupy. The noodles dish was served with green vegetables, eggs, ati ampla (liver and gizzard) and chicken.

Our next dish was Bihun (glass noodles/vermicelli). Similar to the noodles, you can have Bihun Goreng, Godhog or Nyemek. It has quite a similar configuration to Bakmi Nyemek, but the Goreng version was cooked with sweet soy sauce. 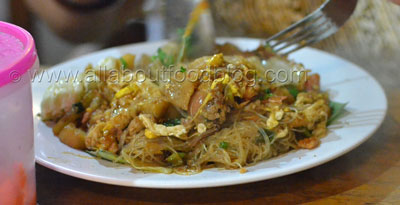 I chose its Nasi Goreng Mawut as I love good fried rice! The word ‘mawut’ (chaotic) is for mixing noodles into the fried rice. It is chaotic as one would not normally mix rice and noodles!

All of the dishes above are priced at Rp 20.000,00. That’s less than AU$ 2. They are also served on a pandan leaf that enhanced flavours.

If you think you can’t finish a whole plate of them, I suggest you share it with someone else. The half-portion version of the dish would cost you Rp 18.000,00 (that’s only 2k difference!).

The next two are add-ons that some of you might not enjoy. One is Krengsengan Ati Ampla and the other is Krengsengan Brutu. Krengsengan is a stir-fried dish with sweet soy sauce. It costs between 80c – $1 and you can have four different choices: ati Ampla (liver and gizzard), brutu (chicken’s butt), sayap (chicken wings), and paha (chicken thighs). 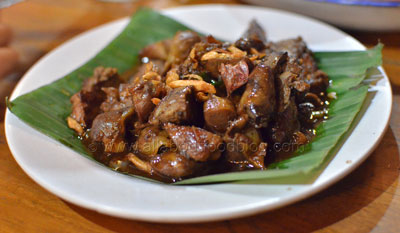 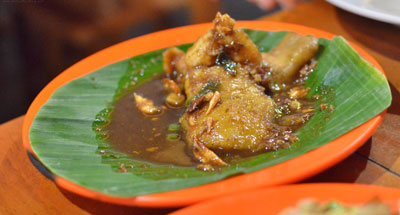 For a more authentic feel to your meal, try its Teh Poci drink for only Rp 6.000,00. Teh poci is a special tea served hot in clay pot. They also use rock sugar if you like your tea sweet. 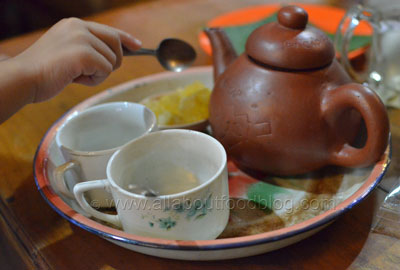 Bakmi Jowo DU 67 offers the resident of Bandung authentic Javanese dishes without actually going to Central Java! Thanks to its char-grilled Bakmi and Nasi Goreng.

Our last review was an all you can eat restaurant in Jakarta costing us $40 per person. A plate of noodles in this restaurant, costs us less than a mere $2!

Furthermore, $2 won’t be the cheapest food you can find in Indonesia. It just shows the discrepancy of buying power amongst Indonesian citizens!