Before I decided to write about it, I have been to El Topo Mexican restaurant twice: The first one was a small lunch with colleague and the second one was a bigger lunch with friends and family. El Topo Mexican is located on the rooftop of The Eastern in Bondi Junction.

Without further ado, lets get on with the food!

It is not a typo from carrots nor the name of an Australian sports. It is really a bowl of roast and crispy crickets for you to enjoy. I asked a Mexican friend of mine who happened to have lunch with us that day. He confirmed that it was a genuine dish from Mexico although it might not be as common in Mexico City.

I must say it’s quite challenging for my friends to try these out. 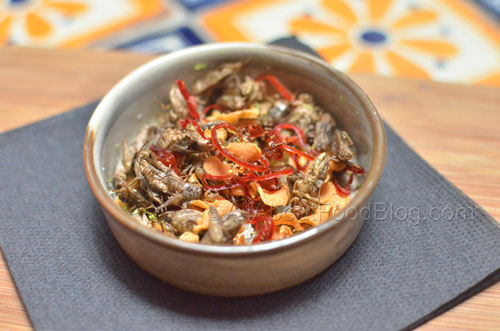 For lunch time, they have a deal of any 3 tacos for $15. They have several tacos to choose from and individually they are $6 – $8.

The tacos were quite small but they had nice fillings. Most of us chose the cochinita pibil (i.e. roast annatto pork) which apparently was the most famous toppings. The second exotic dish of this restaurant is cactus salad. The texture and taste were pretty similar to pickled paprika in a salsa. It was very refreshing even for a non-vegetables eater like me! The ceviche had a gorgeous presentation. Unfortunately, I think there were way too many other items but the ceviche on the plate. The squid ink watermelon provided an interesting colour to the dish. This dish was the main reason why I decided to come back. I was very tempted to order this on my first visit but $32 and a giant beef rib would not do well for my after-lunch work.

However, I can tell you that the beef rib was very yummy. You don’t even need to use your knife to cut through the meat! I was interested in ordering the flan because of its glowing review in Jugernauts. I think I was over-expecting it a bit too much. It was a nice dessert, but not for $14. I love doughnuts… any shapes and sizes! I love them even more when they were freshly made! I’m pretty sure El Topo Mexican is the only place in Sydney (or Australia) that has crickets and cactus on the menu.

There are two El Topo in this premise: El Topo Basement and El Topo Mexican (on the top floor).