This week, we review a restaurant that has been generating quite a buzz in my hometown, Surabaya – Indonesia. I think most people just refer it to as ‘Hotel Bumi All You Can Eat’. It is a new-ish concept that they introduce by combining two restaurants into one gigantic all you can eat eatery. I am actually tempted to just say ‘Don’t read this and just go to the place’. You’ll know why…

We actually arrived at the Japanese wing of the restaurant. It used to be known as Kizahashi restaurant. There are three big stalls in this restaurant: Tempura, Teppanyaki, and assorted Japanese stalls. The tempura stall also serves udon, whilst you can get Japanese fried rice and okonomiyaki from the Teppanyaki stall. The other stall is the most exciting. You can get sushi, sashimi, sorbet, Japanese salad and some desserts. When we were there, they ran out of salmon sashimi and there was only a white fish sashimi and crab stick. We now move to the Indonesian wing of the restaurant. I think officially they still use the restaurant name, Arumanis. The stall I was interested in the most was rujak cingur. It’s a traditional dish from Surabaya that use cow’s nose as one of the ingredients with vegetables and peanut-and-shrimp-based sauce. In addition to that they also have other Indonesian and Chinese-Indonesian dishes. 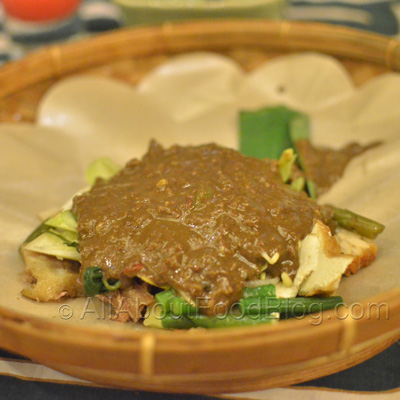 The fun actually starts outside of these restaurants. They have more than a dozen of small stalls. The two things that I love to try when going to a new Indonesian restaurant (if available) are chicken satay and sop kaki. I am sure you should know about Indonesian chicken satay. Sop kaki is a bit more exotic. They are predominantly a soup made of cow’s leg and other innards (or you can always have the meat part). 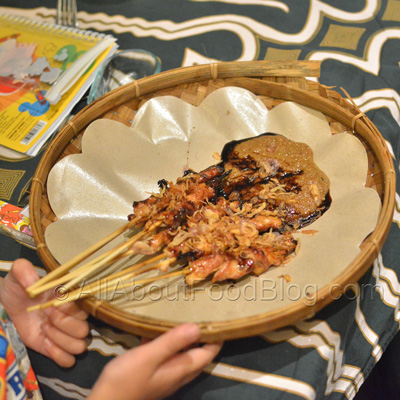 Another dish that I always try to find when in Indonesia is Tahu Tek. It is a traditional fried tofu with egg and peanut-based sauce. It is usually enjoyed with rice cake and crackers. You can also find Shawarma in one of the stalls. However, it didn’t look to exciting for me. You could also find Kikil (a different version of cow’s leg soup) and martabak. 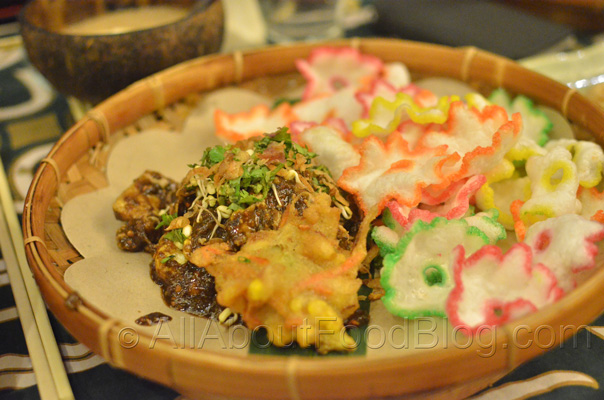 Last but not least, we also tried a few nice desserts. The lightest of all is crepes with sprinkled cheese and chocolate. My favourite, although it doesn’t look apetising in the picture below is sweet martabak. They are very lovely! You can also have an assortment of drinks like Malaysian’s Teh Tarik and Indonesian ginger-based drink called Angsle. There are also some stalls that I did not go to (just because I already felt really full!). Some of the food that I did not get to try: Soba, BBQ chicken, dumplings, steamed stuff, traditional drinks, ice cream, es teler, Javanese fried rice and noodles, and soto.

I have also included pictures of all of the stalls that you can try in Hotel Bumi All You Can Eat.

The final verdict for Hotel Bumi All You Can Eat

Overall, it might not be the best restaurant in Surabaya. However, the vast number of dishes you can try at Hotel Bumi all you can eat was overwhelming, to put it mildly.

This all you can eat package is actually done by two different restaurants merged together.

Hotel Bumi was formerly owned by the Hyatt group.

Rating for Hotel Bumi All You Can Eat: