The restaurant looked unassuming from the outside and the décor was quite minimalist. The staff was very friendly and we were happy to see that none of the mains cost more than $20 on the menu.

Obviously these two are the indicators of a truly great Japanese restaurant. Our little one finished it and we were pretty pleased about their size and taste. $10 for this beauty? We’ll take it anytime! Seriously tho… portion was big and taste was great! I ordered this out of curiosity. Natto is one of those things that need an acquired taste to enjoy. This was my first exposure to natto and I could understand why a lot of people hate it. Personally, I don’t mind the taste and managed to adjust my palate to accommodate the ‘natto’ taste. This dish was on the ‘special’ section.  It is the lesser known sibling of Agedashi Tofu and another ‘first try’ for me. I actually liked how they combined the eggplant and prawn wonton. You just need to add rice for the dish to be a ‘complete dish’. We ordered this because of the picture on the menu was pretty inviting! Despite being pretty interesting, the mackerel lost out in the battle to become our favourite dish. 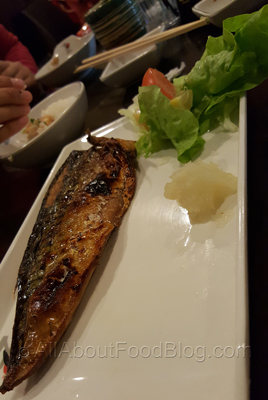 Scampi sashimi at special price? who wouldn’t want that! What’s the catch? You have to order it with a main meal. The spider roll was pretty big. They were generously sprinkled with fish roe. Katsu don is generally the dish that I use to fill up my tummy in a Japanese restaurant, considering that the sushi and sashimi are generally enjoyed in small pieces.
In Sakae Japanese Kitchen, the katsu don was pretty big and the mixed katsu don was even better with a variety of cuts on a plate!

Note: You can swap the tonkatsu with chicken katsu. I did not order the dish and had no capacity to try it either. It looked pretty good tho! Sakae Japanese Kitchen was a pretty small restaurant with incredibly friendly staff! The food was cheap, the portion was pretty big and ,most importantly, the taste was surprisingly good.

Sakae has two other restaurants in Eastwood with a slightly different concept: as a Yakiniku House and Japanese Dining Bar.