We have a new winner in this year’s Good Food Guide 2016. The Bridge Room by Ross Lusted took the prize as well as upgrading their status to a three-hat restaurant!

Other Awards in this year’s Good Food Guide 2016

Pasi Petanen from Cafe Paci has won the Chef of The Year award. Cafe Paci was upgraded to a two-hat restaurant this year.

Fleet in Brunswick Heads was awarded the Regional Restaurant of the Year in 2016. Its head chef is Josh Lewis.

Janni Kyritsis received the Legend Award. I had the pleasure of dining with Janni on the opening of Chef’s Gallery Macquarie. He is truly inspirational!

Young Chef of the year award was given to Lauren Eldridge from Marque.

Food for Good award was given to Rob Caslick from Inside Out Organic Soup Kitchen and Cooking School. This award combined innovation, charity and sustainability.

If you want a good wine, you should go to Bentley Restaurant & Bar as they won this year’s Wine List of the year.

Sommelier of the year went to Sebastian Crowther MS from Rockpool.

Best Bar Food can be found in Rockpool Bar & Grill.

List of restaurants with hats in Good Food Guide 2016

There are four restaurants awarded with three hats as listed in the Good Food Guide 2016 website:

Note: Green is a new entry to the list. Blue is the one who lost a hat 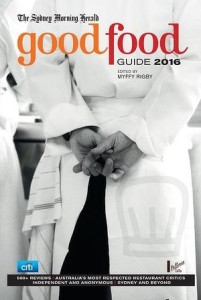